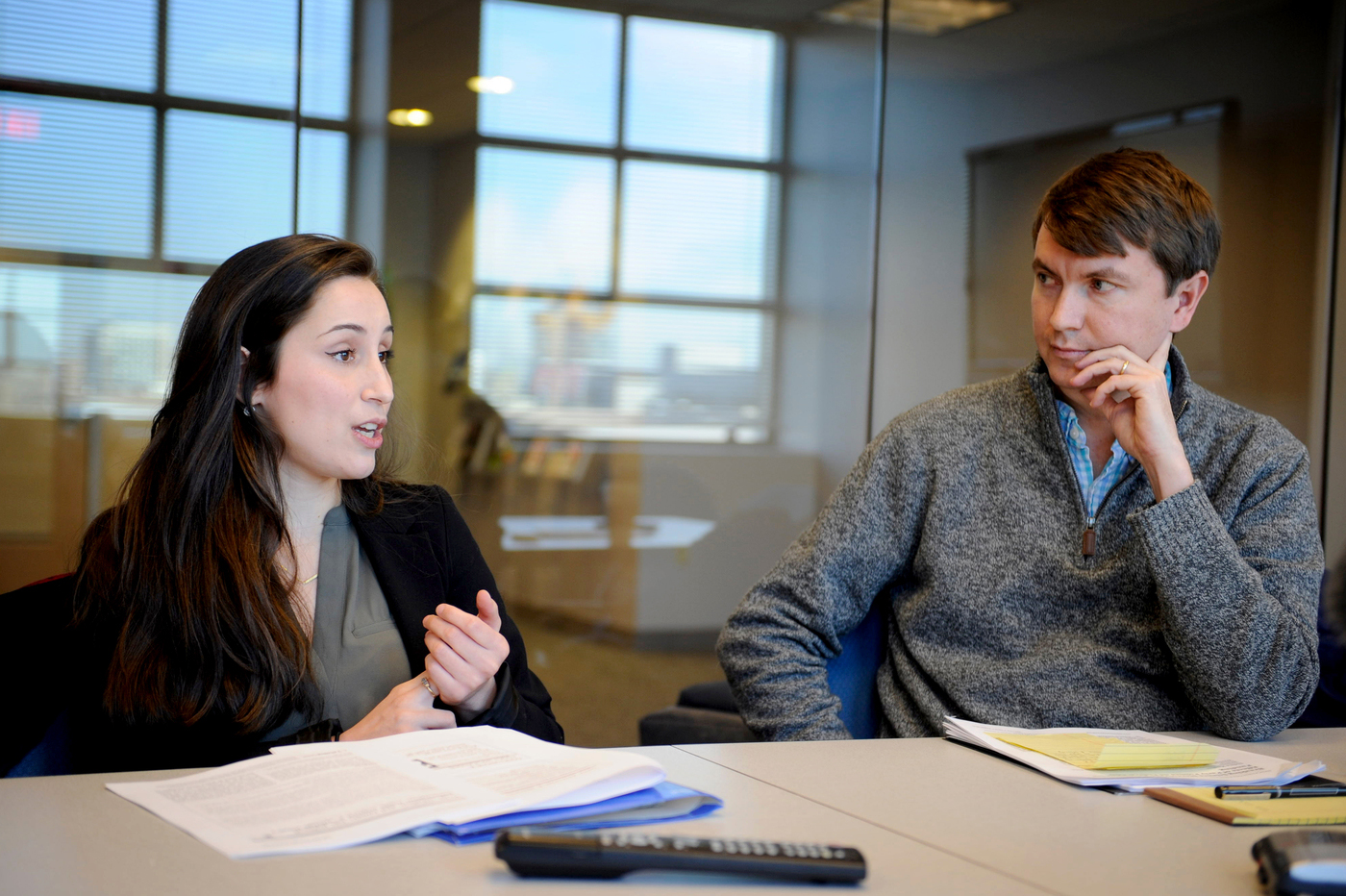 Science and politics: The relationship is hotly debated in the news these days, with both lawmakers and the public noting a great divide between support for research among Republicans and Democrats.

But two papers by Northeastern researchers point to a subtler—more conciliatory— conclusion.

In an article published in the Journal of Science Policy & Governance, political science doctoral student Sidita Kushi examined the effect of party politics on federal research and development funding from 1976 to 2013, parsing whether a predominantly Republican or Democratic House of Representatives, Senate, or administration led to less or more funding for science.

The relationship between the parties and their spending patterns, she found, often ran counter to stereotypical views.

“The overall finding was that the Democratic majority in Congress and the presidential administration actually decreased total R&D funding,” says Kushi, PhD’18. “But there was a catch: That was because the Democratic majority led to less spending on defense.” The level of influence on funding funneled down from the administration, which had the most influence, to the House (moderate), to the Senate (minimal). Why the discrepancy between the two chambers of Congress? “The House tends to be known for catering to constituents more as its members are more locally oriented,” says Kushi.

A different approach drove the research of a team led by Brian Helmuth—professor in the College of Science and the School of Public Policy and Urban Affairs.

Helmuth and his colleagues, including assistant professors Tarik Gouhier and Steven Scyphers, who heads the Social-Ecological Sustainability Lab, analyzed the nearly 79,000 Twitter accounts followed by the 89 U.S. senators of the 114th Congress that were publicly available in February 2015 to see which legislators followed research-oriented science organizations. In their paper, which was published by the journal Climate Change Responses, they also tracked how the science-related follows compared with the senators’ votes on amendments to the Keystone XL pipeline bill, including one acknowledging the significant role of human activity in causing climate change.

The researchers found that the Democratic senators were three times more likely than the Republican senators to follow science-related accounts. But there was an eye-opener here, too: 15 of the 49 Senate Republicans crossed the aisle based on their pipeline vote and their follows.

“Using this combined approach of correlating votes with Twitter accounts, we were able to look directly at the Republican senators who said, ‘Yes, climate change is real, and yes, it’s being driven by human activities,’ and see that, similar to Democrats, they followed science-related Twitter accounts more frequently than other Republicans,” says Scyphers.

We sat down with Kushi and Scyphers to discuss their very different but complementary studies in an effort to understand the true relationship between party politics and science and how that understanding might open doors for greater legislative collaboration.

Here are excerpts from the hourlong conversation.

ON WHAT MOTIVATED THE RESEARCH

Scyphers: In my research, I focus on socio-environmental problems with the goal of developing strategies for sustaining coastal ecosystems and societies. Our team lead, Brian Helmuth, investigates the effects of climate change on marine ecosystems. Our coauthor Tarik Gouhier uses statistics and mathematical models to explain complex environmental patterns. Our study sprang from the desire to make our research findings more accessible to policymakers. We wanted to identify the organizations and senators who would be most helpful in disseminating science-related findings to those without direct access to them.

Kushi: I embarked on this paper to see whether science as a policy endeavor was truly as unbiased and neutral as it’s made out to be. In the political science field, when we talk about science we talk about numbers—science is supposed to be immune from political debates. But that’s not what I was seeing in the world around me. If science is partisan, that might be a good thing for democracy because it means that citizens can alter scientific policy by focusing on electing officials who share their positions. If science is nonpartisan, however, it means that citizens should focus instead on activities like lobbying or rulemaking in agencies.

ON WHERE THE MONEY GOES

Kushi: Defense is the big divider when it comes to science allocations. My research showed that overall R&D funding decreased with a Democratic majority in the House, Senate, and the administration, but that was because the Democrats were more hesitant to spend on defense. When it comes to the Environmental Protection Agency, NASA, and natural resources, the Democrats increased funding by more than $6 billion relative to the Republican majority.

Now, both the National Institutes of Health and the National Science Foundation showed a slight decrease in funding by Democratic majorities, but the amount was not statistically significant, meaning it was likely due to chance or natural error. The qualitative literature shows that, in general, the Republicans are very hesitant to fund the social sciences but are definitely eager to fund the hard sciences—those that relate to applied research that would support weapons and military buildup, for example, engineering and biology. This divide showed up in my models on agency functions: A Democratic administration prompts a decrease of more than $2 billion in any defense-related function and a simultaneous increase in funding for natural resources and space functions by the same amount. So I would explain the NSF finding as reflecting the difference between Democrats and Republicans regarding defense spending.

The agencies that did not see any party-politics dynamics were the Departments of Energy, Homeland Security, and Transportation. I suggest that’s because these agencies are so necessary and so non-politicized that funding for them really doesn’t deviate much by an incoming administration or by party politics.

ON A MEETING OF MINDS

Scyphers: One thing that surprised us—but that also correlates with Sidita’s results—was that the Twitter accounts of two of the primary funding agencies, the NSF and NIH, did not fall on anyone’s top lists, not the Democrats, the Republicans, or the crossovers. They weren’t even in the top 10 of the followed science accounts.

Like Sidita, we saw a stronger environmentalist bent on the Democratic accounts and more of a defense or disaster-focused bent on the Republican side. This is important because we wanted to know which particular sources the senators valued. Knowing what they value—what information they actually want—can tell us whom we should communicate with to get our research seen. We found that so-called “boundary organizations”—apolitical organizations that maintain links between scientists and end users such as policymakers—could play an important role.

Kushi: Their findings regarding perceptions of science confirm a lot of what we study in political science and align with my results, especially regarding subjects like climate change and the environment. The EPA, as well as environmental and natural resource functions, were across the line associated with much higher R&D funding from Democrats in every single one of my models.

ON MOVING OUT OF PARTISAN BUBBLES

Kushi: In political science research, we talk about “groupthink mentality.” A strong characteristic of any bureaucratic institution is that people who think alike will work together and perpetuate a cycle of so-called shared preferences. The only way to alter that is by having members of different political parties collaborate on less political issues such as infrastructure or basic defense. That can bring about a “spillover effect”: When people can work on a few basic things together, their cooperation and networking can spill over into more political spheres.

Scyphers: Our paper completely agrees with that. Sidita used the term “shared preferences.” We said the exact same thing and called it “shared values.” For example, if a shared value or preference across the Senate were to be able to rapidly recover from hurricanes, then a powerful message could be that climate change may increase the frequency and intensity of hurricanes and therefore climate change is a threat to our national security and safety. Translating the message that way could engender a positive response on both sides of the spectrum.

We also found that the senators on political committees are often the strongest voices on each issue. A key takeaway from our paper is that many of these people are out on the fringes but that those in the middle—including the crossovers—may be the best people to talk to as they share similar values, speak the same language, can broker a deal between two very different groups.

Kushi: We call that “image framing” in public policy—the idea that to create a new policy agenda from one that you no longer prefer, you have to redefine the problem. For example, in speaking with Republicans you would change something like “the environment” from being defined as protecting the environment and our natural resources and conserving energy to being defined as an economic problem. You’d say, “This use of oil is decreasing our gross domestic product,” or “Our infrastructure is suffering because of environmental degradation.” Concentrate on applied research: “Here is how this money or this research is going to affect our future by undermining security.”

The people you call “crossovers” we call “policy entrepreneurs”—people who take an idea and reframe it to try to influence the result. Unfortunately these people are rare, and when they do surface it takes a couple of tries before they find the right definition of the issue and can get others on board.